On December 21st, SFPAL partnered with Boston Properties and hosted the 3rd annual Winter Wonderland presented by Boston Properties and CBF Electric. The event was held at the Embarcadero Ice Rink. The event was a huge success, topping last year’s event which was tough to do. Much Thanks to Chief Scott and members of his Command Staff for taking time from their busy schedules to greet the kids. PAL President Commander Dan Perea was on hand to ensure a good time was had by all. Kids from all over San Francisco were treated to a day of ice skating. They got the opportunity to hit the ice with members of the San Francisco Police Department, and display their skills. Santa also took time from his busy holiday schedule to stop by and take pictures with the group. The kids and their families were treated to a delicious lunch and a t-shirt. It was a great day filled with laughter and joy! The day would not have been possible if not for the continued support of Boston Properties and CBF Electric. For more pictures of the event, please click here. 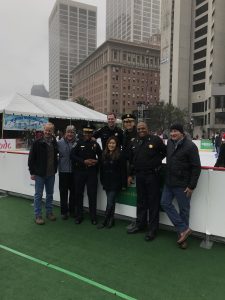 Congratulations to all of our kids in the Jiu-jitsu program

SFPAL remains committed to serving San Francisco youth and plans to host a virtual football conditioning program. Please take a moment and let us know if your child would be interested in participating.